iPhone 13 comes with a diagonally arranged camera lens and then there is a pink iPhone as well. iPhone 13 notch is 20 percent smaller and it comes with all the Face ID sensors packed in a smaller space. iPhone 13 display comes with 1200 nits brightness and a  brighter XDR display. The display sizes are 6.1-inch and 5.4-inches for the iPhone 13 and iPhone 13 mini.

Amazon, Flipkart and Airtel would be streaming the event live on their websites in India.

Stay tuned with us for all the Live Updates on the iPhone 13 series launch.

The iPhone 13 Pro series has a 120 Hz ProMotion refresh rate on the display.In terms of camera, Apple has added macro photography on the iPhone 13 Pro.

Apple has come up with major improvements when it comes to the iPhone 13. The change includes  low-light performance for both the mini and the regular version. Besides that, there will a new cinematic mode on the camera and its primary job is to keep the subject in focus as and when the subject moves. Also there is a portrait mode for video.

iPhone 13 and iPhone 13 mini comes with display sizes of 6.1-inch and 5.4-inches. Apple iPhone 13 runs the A15 Bionic chipset. In addition to that, the phone has a six-core CPU with 2 high-performance cores and 4 efficiency cores. It also comes with a 4-core GPU. It has a 16-core Neural engine for machine learning tasks.

Apple CEO Tim Cook has now announced the launch of iPhone 13. iPhone 13 comes with a diagonally arranged camera lens and then there is a pink iPhone as well. iPhone 13 notch is 20 percent smaller and it comes with all the Face ID sensors packed in a smaller space. iPhone 13 display comes with 1200 nits brightness and a  brighter XDR display. The display sizes are 6.1-inch and 5.4-inches for the iPhone 13 and iPhone 13 mini.

Apple has confirmed the price of both the new iPads. Wi-Fi models of iPad will be priced at Rs 30,900, and Wi-Fi + Cellular models will cost Rs 42,900, in silver and space grey finishes. The Smart Keyboard for iPad will be sold for Rs 13,900. Smart Cover for iPad will cost Rs 3,500 in black, white, and English lavender.

Apple has now launched the much touted Watch Series 7 which will come with watchOS 8 and that has the capability of automatically detecting bike rides and fall detection when you are riding. It also supports ebikes. It has got a completely changed display and it looks bigger and brighter than before.

In terms of camera, Apple iPad mini will have a rear camera of 12MP and it can record in 4K. On the front, it will have a 12MP ultra-wide camera. It is also equipped with a new speaker system with stereo. It will come with a new folio cover.

In a surprising manner, Apple has first launched iPad mini which comes with an 8.3-inch screen along with Touch ID as part of the top button. The company claims that this will bring 40% better performance when it comes to CPU and also massive jump in GPU performance. It will be a 5G supported iPad and will run on A13 Bionic chipset.

Apple’s latest iPad 2021 will have the A13 Bionic chipset along with a button at the bottom. The iPad is equipped with a 12MP ultra-wide camera with 122 degree point of view. The company further says that the front camera is designed in such a way that it will bring great productivity. It will also support Apple Pencil and ship with iPadOS 15. 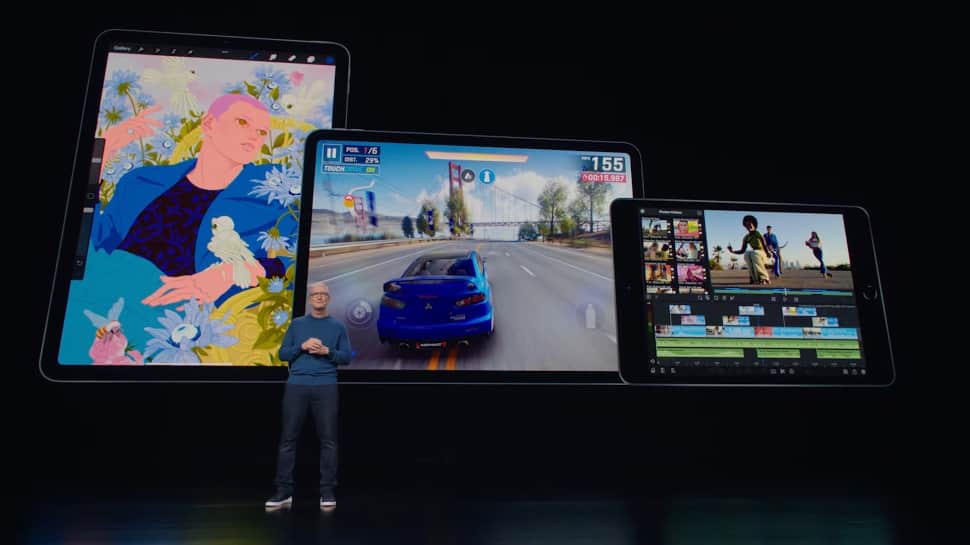 Before one can expect anything, Apple’s CEO Tim Cook has started talking about the new iPad.

Apple’s keynote event has just begun and CEO Tim Cook has appeared for some of the biggest announcements. Right now, he is talking about Apple TV+ first.

Apple has started the event in which it says that this event can livestreamed easily on iPhone 7 or the above version of it. Besides that, it can be seen in iPad (5th generation or later), or iPod touch (7th generation) using Safari on iOS 12 or later; or a Mac using Safari on macOS Mojave 10.14 or later.

Apple event’s livestream video has started on Apple’s website. The keynote will start in a few minutes.

Apple’s September event will begin in just 5 minutes and it is going to be a two-hour event. The highlights of the event are expected to be the iPhone 13 series, Apple Watch Series 7 and more.

Apple is set to launch iPhone 13 in a few minutes. A few days ago, there were leaks about the iPhone 14 Pro Max getting launched. Now people are thinking that Apple might ditch iPhone 13 for iPhone 14. You will get to know them in just 15 minutes.

Apple CEO Tim Cook tweeted ahead of the launch of iPhone 13. He wrote, “Good morning from somewhere a little different this time. We’re California streaming in 3 hours! See you soon.”

Are you confused about watching the Apple event? You can watch tonight’s iPhone13 event live on Apple’s official YouTube channel. Also, catch all the minute to minute updates at our live blog too

A Canalys research shows that iPhone 12 with its dual cameras had achieved the highest share in the first half of 2021. The iPhone 12 saw a 24 percent market share, and the Pro Max had a 22 percent share, followed by the Pro at 21 percent.

Apple Store has gone down ahead of iPhone 13 launch at the California event.

All the Tweets related to the Apple September 14 event now get a new ‘like’ animation after you press the heart. You can check that on any tweet with the #AppleEvent hashtag.

People in India can livestream the Apple event on Amazon and Flipkart as well.

According to a report from analyst Ming-Chi Kuo, the `AirPods 3` will be the new version of Apple`s AirPods earbuds, which were last refreshed in March 2019.

Users can watch Apple’s event on the company’s official website and its YouTube channel. The event starts at 10.00 am Pacific Time or 10.30 pm IST.

iPhone 13 is expected to have cameras with ProRes video recording in higher quality, AI powered filters for photos, and a “video version” of Portrait Mode which will be called Cinematic Video.

iPhone 13 series might come with the same design as iPhone 12 except for a smaller notch and better LTPO displays with high refresh rates.

Apple may also launch Watch Series 7 with a smaller “S7” chip, potentially providing more space for a larger battery or other components.

A recent report said that has claimed that the Cupertino-based tech giant will increase the price of the upcoming iPhones to compensate for rising chip production costs.

The iPhone 13 Pro and iPhone 13 Pro Max will be available with up to 1TB of storage, which would be the largest capacity ever offered for an iPhone, reports MacRumors

The iPhone 13 lineup will start with 128GB of storage, with no 64GB option for any models.

The upcoming iPhones are widely believed to bring some upgrade.

The iPhone 13 Pro and iPhone 13 Pro Max will be available with up to 1TB of storage, which would be the largest capacity ever offered for an iPhone, reports MacRumors

The iPhone 13 lineup will start with 128GB of storage, with no 64GB option for any models.

Apple is all set to host its special “California Streaming” launch event on Tuesday and this year one can expect the tech giant to unveil the iPhone 13 lineup and the Apple Watch Series 7, along with new iPads and Macs.

On the software side, Apple has announced new photographic profiles, which look like they work a little like traditional camera filters with an added dose of computational photography. On the video side, the cinematic focus feature announced for the iPhone 13 will also be available on the 13 Pro and Pro Max. The iPhone 13 Pro will also be able to film in up to 4K/30fps in ProRes, a higher quality video format that gives video editors more control when tweaking footage after it’s been shot.

Internally, both devices are using Apple’s new A15 Bionic chip, which offers the familiar CPU and GPU speed increases compared to last year. Apple also says the chip should be faster for machine learning tasks. Battery life has also been improved, with the 13 Pro lasting 1.5 hours longer than the 12 Pro, and the 13 Pro Max lasting 2.5 hours longer than the 12 Pro Max on a charge. Storage options for the iPhone 13 Pro range from 128GB up to 1TB, the most storage Apple has ever offered on a phone.

This is the third year Apple is splitting its flagship phone lineup into regular and “Pro” devices. Last year, however, many reviewers noted that there wasn’t much of a difference between the iPhone 12 Pro and the iPhone 12. Yes, the 12 Pro had an extra telephoto camera, lidar sensor, and more RAM and base storage, but its basic design, processor, 5G capabilities, and OLED display were all similar, if not identical, to the regular iPhone 12.

Developing… we’re adding more to this post, but you can follow along with our iPhone 13 and Apple Watch event live blog to get the news even faster.

Who is Angela Yee? Why she is leaving The Breakfast Show? Age and Net Worth

Who is David Bonola? Arrested for Killing Orsolya Gaal, Aged 44, Wife and Family